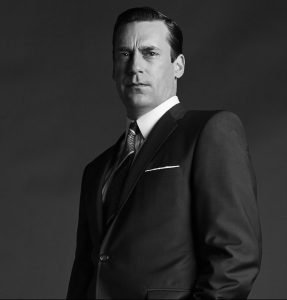 Alone in a red corner booth is DON DRAPER, early 30’s, handsome, conservative and despite his third old fashioned, he is apparently sober. He is doodling on a cocktail napkin. He crosses something out, puts down his fountain pen, and taps a cigarette out of a pack of “Lucky Strike”. 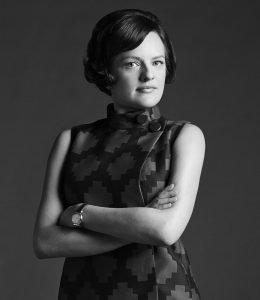 A half step behind her, carrying a cardboard box with supplies is PEGGY OLSON, who at 20 seems far younger. 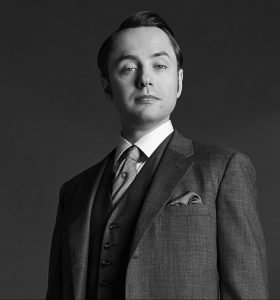 Pete Campbell. He is mid-twenties, charming, all-American and on the phone. 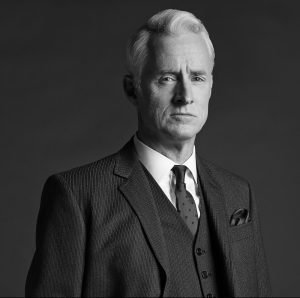 Down the hallway comes a slightly disheveled Don Draper followed by ROGER STERLING, an elegant WASP  with an incredible head of grey hair. Roger is the Sterling in “Sterling Cooper Advertising”. 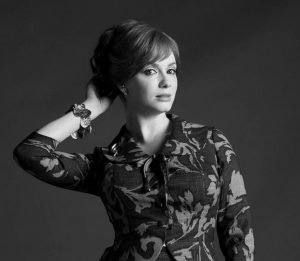 Waling down a wide corridor with open offices on either side is JOAN, mid twenties, an incredible put together office manager.

Three young execs, KEN, DICK, and Harry in apparently identical suits take off their hats and crows to the back of the elevator.

Dick's name is changed to Paul.

SALVATORE ROMAN, transparently gay--although in 1960, no one seems to know it--stands in the doorway with a hand on his hip like Marlene Dietrich.

Inside, Roger waits with a few people, including RACHEL MENCKEN, early twenties and stunning in a Chanel suit.

The door opens to revel MIDGE DANIELS, a sexy no nonsense woman about Don's age wrapped in a red kimono.

Suddenly we are close on a woman's hand as it turns the switch on the end table lamp. We pull back and reveal BETTY, 29, and beautiful despite having just awakened.

The Mad Men script did not have acts, however since it aired on AMC, there were ad breaks thrown in. As far as I can tell, the following ad breaks occurred :

Ad Break 1: After the scene of Don meeting Rachel Menken and mistaking his Jewish coworker as Mr. Menken.

Ad Break 2: After the scene where Don tells Peggy not to let Pete go through his office after he stole the psychology report.

Mad Men did not have many changes from the screenplay, so the next sections are broken down by changes instead of by acts.

Don has to come up with a sales pitch for Lucky Strikes.
Don has to land Menken’s department stores as a client, but has a bad first impression with Rachel Menken.
Don has to deal with Pete Campbell who hopes to take Don’s job one day.

Peggy is Don Draper’s new secretary and has to learn to navigate the corporate, male-dominated ad business.
Peggy has to deal with advances by coworkers including the engaged Pete Campbell.

At the beginning of the script, 1960 is shown on the screen to indicate the time period.

At the beginning of the pilot, 1960 is not shown on the screen. The show instead relied on its setting and characters to help set the period.

After the Bus Boy tells Don he loves smoking, Don tells him that is great. The scene ends after that.

After the Bus Boy tells Don he loves smoking, Don tells him that is great. Before the scene ends, Don looks around and sees that  I love smoking won't work because everyone loves it and it doesn't differentiate the product.

Midge is nude under her shirt.

Midge has a bra under her shirt due to being on network television.

Peggy is mentioned in the next scene and described as if it is her first introduction.

It is Peggy that is in the elevator with the Dick, Harry, and Ken.

Don waits until the German researcher is out of the room before throwing out her report.

Don throws the report out right in front of the German researcher.

Don sleeps soundly before being woken up by Peggy.

Faint war sounds are heard as Don sleeps, suggesting he is dreaming about the war he fought in.

Peggy is blinded by the light off the doctors forehead during her examination.

Peggy looks at the calendar as a distraction during her examination.

No title card is shown.

During the meeting there is a shot from Dons POV looking at the panel from Lucky Strike as he nervously tries to think of an idea.

There is no POV from Don's perspective.

Don sees the report is missing from his trash.

Don already knows Pete took the report and he is not shown discovering it is missing from his trash.

The Song "On the Street Where You Live" by Vic Damone plays during the final scene and the credits.

Exterior shot of building added before meeting with Lucky Strike.
Interior of building lobby added before elevator scene that introduces Ken, Dick and Harry.
Animation of Don falling of a building then smoking on his couch.
In the script, the images and sounds of 1960s mentioned in the script are are show on the buildings as he falls.

Exterior shot of Manhattan before the opening scene with Don in the restaurant.

Mad Men definition is added after title sequence instead of before.

Don drops Alka-seltzer as Roger leaves which leads into the next scene of Salvatore coming in. This scene is taken from after the switchboard scene and before the Smoking Pitch scene. The scene of Don falling asleep on his couch is then placed after his meeting with the German researcher.

There are two scenes that show excellent use of subtext. The first scene is the scene where Salvatore shows his artwork to Don. The script states that Salvatore is transparently gay, but due to the time period none of the characters ever entertain the idea. Salvatore’s dialogue highlights his motivation but  isn’t too on the nose.

The second scene is the meeting with Lucky Strike. After they talk about the bogus cancer claims, the entire panel of Lucky Strike personnel break out into a cough at the same time.

As mentioned above, the homosexual and smoking subtext are humorous because we know how things turned out. Don’t be afraid to foreshadow the future in a clever way, just don’t beat your audience over the head with it.

Mad Men is set in 1960, so there was a lot of research that had to happen in order to get the setting, characters and way of life correctly. Not all details are going to be accurate, especially since the story may dictate creative changes, (such as adding in a fictional ad company), but don’t insult your reader by throwing in elements that clearly don’t belong in the time period.

Bottom line, if you’re doing a period drama, become an expert on that period.

Right before his meeting with Lucky Strike, the time is shown which indicates Don is coming down to the wire. However the episode is not set up as a countdown because there is no urgency from Don and there are no known consequences. Don doesn’t scramble at the last minute with to find the perfect idea before the time runs out, instead he goes in cold and thinks of the idea during the meeting, which makes the time irrelevant.

Countdowns are useful to reinforce the stakes for the character, but don’t force it if it’s made redundant.

There is an ensemble of characters introduced in the pilot, but it is important to remember the main characters and the secondary characters. Don and Peggy are made the obvious main characters, and we see the relationships established around them. Roger and Joan act as mentors respectively and Pete is there to cause conflict in both their lives. Various other characters are introduced around the office to round out the cast and set up those characters for future development.

The workplace culture in 1960 is very different from today’s workplace culture, especially for women.
Don’t be afraid to write how people acted or were treated if writing something from the past. Today, you never know what might offend someone and cause you unfortunate problems, but if your characters are in a time and place where certain actions and attitudes were expected, then that is the way the story should be told.

The art scene was initially shown right before the Lucky Strike meeting, but instead it was moved earlier to break up the story lines.

A few directional and editing changes to note:

Don has a POV during the meeting to show how nervous he was, but that was not used by the director.

The title cards to depict the time period and time of day are also not used.

Highlighting these on the screen had the possibility of taking people of tune with the time period.

There is a title sequence mentioned in the script, but the animated title sequence in the pilot is a much better depiction of not only the ads seen in 1960, but also the theme of an Ad Man making it to the top only to eventual fall.

The definition is also added after the title sequence, not before.